Iowans eager to contact the Governor about her new education proposals online were unwittingly spammed with a solicitation for campaign funds. Participation in the public debate has been heated around the Governor’s legislation that would take funding away from public schools and give that support to private schools instead.

An internet poll created by the Governor’s campaign has circulated on social media, and asks only “Do parents deserve a choice and a stronger voice in their child’s education?” and “Do you support School Choice?”

Potential respondents are only given the option of answering the second question, and the only options are yes or no. No space for further comment is provided. On the next page, after respondents enter their contact information, prompts participants for a donation.

Although paid for by the Kim Reynolds for Iowa Committee, not the governor’s office, the page is branded as “Kim Reynolds Governor” which could be confusing for Iowans who want to give input on education policy.

“Iowa families want the best for their kids and our public schools. They deserve better than to be spammed by Governor Reynolds for campaign donations.” -Matt Sinovic, Progress Iowa Executive Director

“Iowa families want the best for their kids and our public schools. They deserve better than to be spammed by Governor Reynolds for campaign donations,” said Matt Sinovic, executive director of Progress Iowa. “This page should be taken down immediately, and the Governor should apologize for using the good intentions of so many Iowans to shamelessly scrape in campaign cash.”

Just last Wednesday, Gov. Kim Reynolds introduced two education bills—one for requiring school districts to have in-person school options and one that would divert resources to nonpublic schools in the form of state-funded vouchers, allow open enrollment in all districts and remove voluntary diversity plans for larger districts. 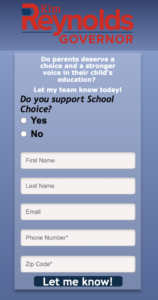 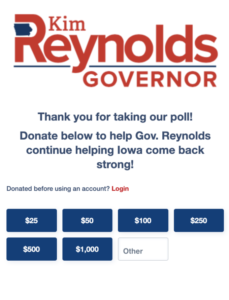 Nikoel Hytrek covers the Iowa Legislature for Potluck. Previously she has reported for Iowa Starting Line, the Iowa Feminist and the Omaha World Herald.
Copy Link Link was copied