With each birthday, I reflect about my life and how quickly time has passed.  I celebrate my 75th birthday today, March 25th.  I think about my southern roots and my childhood visits to rural North Carolina.

I was young but I was aware of the racism and Jim Crow laws. 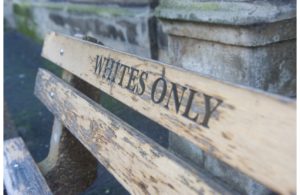 I saw “white only” and “colored only” signs at the drinking fountains.  I also remember the beginning of the Civil Rights movement in 1955 when Rosa Parks refused to give up her seat on a city bus.  I admired her for that.  It’s not everyone who will allow themselves to be arrested and spend the night in jail for a special cause.  I had the pleasure of playing the part of Rosa Parks in a Des Moines Community Playhouse production of the same name, “Rosa Parks” in 2004.

As I continue to reflect, the death of Martin Luther Jr. comes to mind. 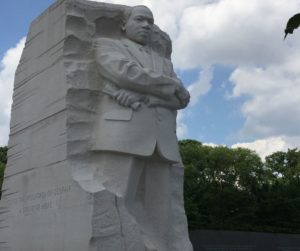 It devastated me so much that I couldn’t attend classes for many days at Clarke University in Dubuque, Iowa where I was a student.  That was the year of 1968 when we also lost Bobby Kennedy.  It was also the year of the riots at the Democratic National Convention.  These were turbulent times.

I recall the hunt for Angela Davis and after being acquitted, she and the jurors partied while television cameras picked it up.  I had just completed my graduate school studies at the University of California at Santa Barbara.  This was in 1970.

As I learn about the hospitalization of Supreme Court Justice Clarence Thomas, I reflect back to the trial of Anita Hill and the criticism she received for accusing him of sexual harassment in 1991.  I like her courage in bringing his actions to the forefront, even though his nomination was eventually confirmed.

My mom was alive during the trial of O.J. Simpson in 1995 and from the beginning thought he was guilty.  She lived with me and every day, when I was returning from work at East, she recounted the daily trial to me.  She was very disappointed when he was acquitted.

In 1998, I was selected as Iowa Teacher of the year and that drastically changed my life.  I went from a local school teacher to a local celebrity, attending events and speaking at many of them.  I met Presidents Bill Clinton in 1998 and Barak Obama in 2007 and spent quality time with both of them. 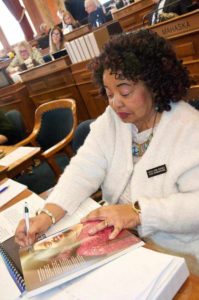 I became an Iowa State Representative in 2010 and am running for my 7th term.  I am happy to fight the good fight for the people of Iowa and am proud of recently being elected as Chair of the Iowa Legislative Black Caucus.

Yes, I have lived 75 years and recount many, many historic events from the perspective of BEING THERE.  I am pleased with these 75 years and hope to add a few more years to that number.

State Representative Ruth Ann Gaines of Des Moines serves Iowa’s 32nd House District and is the Chair of the Legislative Black Caucus. Before being elected to the legislature, Rep. Gaines taught for 40 years at East High School, and has recently finished up her 50th year teaching at DMACC. She is the recipient of many awards, including: • 2020 Iowa Democratic Party’s We The People Award as a Member of Black Caucus • 2020 Progress Iowa’s Harkin Hero Award as a Member of Black Caucus
Copy Link Link was copied