***This article talks about sexual assault and violence, and may be triggering to some readers.

April is Sexual Assault Awareness Month and the last Wednesday of April is designated as a day of action, known as Denim Day. Participants are encouraged to wear jeans to show solidarity with survivors of sexual assault and educate themselves and others about all forms of sexual violence.

Denim Day began after a high-profile rape case in Italy. The survivor was blamed for her rape because she was reportedly wearing tight jeans. The judge argued that because her jeans were so tight, she must have participated in and consented to the rape. Individuals are now encouraged to wear jeans in protest and solidarity with victims.

“We wear denim today to honor all survivors of sexual violence,” said Gwen Bramlet-Hecker, Executive Director of the Riverview Center. “It’s a reclaiming of sorts, and an act of rebellion. The roots of Denim Day date back to the late 1980’s when the rape conviction of a perpetrator was overturned by the Italian Supreme Court as it determined the victim’s tight jeans somehow indicated consent on her part. We must continue to do all we can to challenge rape culture that persists and raise awareness of the systemmic challenges survivors face when seaking healing and justice.”

An American is sexually assaulted every 68 seconds. And college-age adults and those on college campuses are at a much higher risk of being sexually assaulted. An organization at Drake University hopes to combat that statistic, by spreading awareness about sexual violence all year round and holding special events for Denim Day. 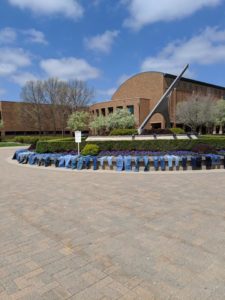 “Denim Day at Drake is a widely supported event throughout campus,” said Lynne Cornelius, the Violence Prevention Coordinator at Drake University. “Violence Intervention Partners (VIP), Drake’s on-campus student advocates, collect jeans from students, staff, and faculty to use in displays across campus to bring awareness to the day. With each display, we post signs that explain the day and share information about how to support victims/survivors. At the end of the event, the group donates the collected jeans to a local shelter.”

At the federal level, President Biden is taking action to fight sexual assault. Earlier this year he reauthorized the Violence Against Women Act. This will provide greater protection against domestic violence, but it does not go far enough. Lawmakers failed to close the so-called “boyfriend loophole.” While federal law prohibits domestic abusers from purchasing firearms, that law only applies if the abuser has been married, lived with, or had a child with the victim.

“Joni Ernst refused to close the “boyfriend loophole” in VAWA because she wouldn not stand up to the National Rifle Association, who is against seemingly any provision which could further limit gun sales,” said Matt Sinovic, Executive Director of Progress Iowa. “It’s time Senator Ernst and other Republican lawmakers stop pandering to the corporate interests of the NRA and pass laws to keep all victims safe.”