A Light at the End of the Tunnel 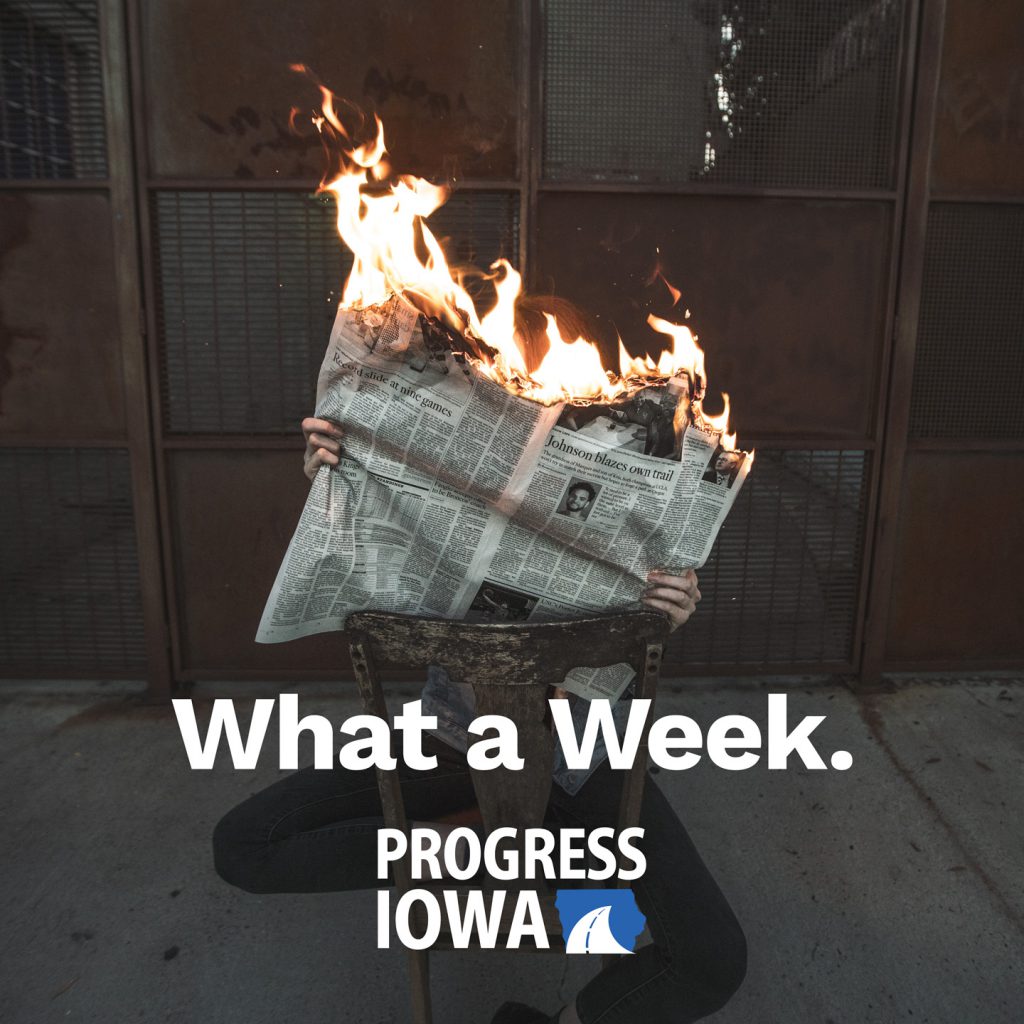 We get it. The news can be a bit much these days. Thankfully, Matt and Ivy from Progress Iowa break down the big headlines of the week so you don't have to.

How Low Can We Go?

Matt and Ivy discuss Governor Reynolds’s Condition of the State address and agenda, the death penalty bill that passed a subcommittee vote despite almost unanimous public comment opposing it, the second impeachment of Donald Trump, and State Senator Zach Whiting’s gross comparison of the attack on the capitol with civil rights marches. Then Matt speaks […]

Treason, Terror, and a Silver Lining

We're back for the first episode of 2021. It feels so good to leave such a toxic and tumultuous year behind for... oh...

Every year Progress Iowa holds a holiday party to relax, reflect on the hard work we’ve done over the past year, and gather with friends and allies. Obviously due to COVID-19 that couldn’t happen in person this year so we asked our friends to record videos and we streamed the event on Facebook. Enjoy holiday […]

Matt and Ivy talk about the ups and downs of last week’s election, the COVID crisis that just keeps getting worse, and the complete lack of leadership from the Governor’s office. Wear a mask. Wash your hands. Stay apart.

Donald and Kim. Two Beans in a Pod.

Kim Reynolds opens for Donald Trump at a rally in Des Moines that spits in the face of her own COVID guidelines, Joni Ernst implodes in her final debate with Theresa Greenfield, David Young tells more lies about his record, and Ivy talks to Murphy Burke of Next Gen Iowa about their efforts to get […]

A hot mess inside a dumpster fire inside a train wreck

Matt and Ivy discuss the Ernst-Greenfield debate on Iowa Press, the Trump-Biden debate/”hot mess inside a dumpster fire inside a train wreck,” and Friday morning’s breaking news that Donald Trump and others in his circle have COVID-19. Links Watch the Ernst-Greenfield debate (Iowa PBS on YouTube) Watch the Trump-Biden debate (C-SPAN on YouTube) Watch a […]

Matt and Ivy talk about the loss of Supreme Court Justice Ruth Bader Ginsber and our US Senator’s baldfaced lies to the people they serve. They also share several hot takes on birds… Yes, birds. Links: Rob Sand’s tweet about RBG and the Des Moines Symphony

Editors note: This episode was recorded on Friday, September 18th, before the death of Justice Ginsburg. This week Matt and Ivy talk to Ben Jealous with People for the American Way about Iowa’s Senate race and the importance of our nation’s courts in that race.

We agree, Mr. President. This is deadly stuff.

Trump spilled the beans to Bob Woodward (and who knows who else!) while keeping the public in the dark about the deadliest crisis in modern history, Congresswoman Abby Finkenauer squared off against State Rep Ashley Hinson and put her on the defensive on her terrible labor record, and Senator Joni Ernst peddles conspiracy theories about […]

Back to school whether we like it or not.

Correction: The amount of funding passed by the U.S. House for USPS that is currently being held up by the Senate is $25 billion, not $65 billion. Matt and Ivy are joined this week by Danielle Root from the Center for American Progress to talk about the Trump administration’s attacks on the post office juuuuuuust […]

Welcome to new cohost Ivy Beckenholdt! Matt and Ivy break down the week’s headlines, give their hot takes on a couple stories and give shoutouts to the Iowans who deserve them. Then, they speak with Linn County Supervisor Stacey Walker about conditions on the ground in Cedar Rapids 10 days after the historic derecho storm. […]

A Hurricane in Iowa

This week we depart from our usual format to hear from some people on the ground in Cedar Rapids following the derecho storm.

Doesn't mean he's not going to try, though...

Lyz Lenz is back! Ashley Hinson endorses Abby Finkenauer’s positions but forgets to tell everyone, and Governor Reynolds straight up lies about the number of sick people in our state on behalf of big business. Cool. Links: Follow Lyz on Twitter you cowards! Des Moines Register – GOP congressional candidate Ashley Hinson apologizes for plagiarism, […]

Live from the Red Zone

A new report from the White House Coronavirus Task Force puts 18 states, including Iowa, in the "red zone" for the number of new COVID-19 cases per 100,000 people.

The pandemic isn’t over just because you’re tired of it.

Parades and Pandemics with Lyz Lenz

Matt and Lauren are joined by Cedar Rapids Gazette columnist and author Lyz Lenz to discuss the news of the week and the state of our fine state.

Iowa's re-opening continues during one of the deadliest weeks we've had since this pandemic began.

Progress Iowa held a virtual town hall to discuss the impact of COVID-19 has had and will continue to have on rural Iowa.

Matt and Lauren talk about another week of no shelter-in-place order for Iowa despite increased cases of COVID-19 and Governor Reynolds’s refusal to join a group of neighboring states to plan a return to normal life. But we got a PSA from Ashton Kutcher, so we got that going for us. Subscribe to Progress Iowa’s […]

Kim Reynolds Is NOT A Faith Leader

The Governor wants us to Shelter in Faith? – what a week.

Kim Reynolds is NOT a Doctor

Iowa is one of the last states in the nation not to have a shelter-in-place order to help combat the coronavirus pandemic.

We didn’t think we’d have to say this but here we are: people are worth saving. Yes, all of them. Every time we argued that a program would "grow the economy," we helped the opposition cement the view that this is the singular objective of policymaking. — Anat Shenker-Osorio (@anatosaurus) March 26, 2020 Links: Vox: […]

That escalated quickly. Matt and Lauren discuss our Senator’s “no” votes on paid sick leave, one Senator’s need for a history lesson, compare Iowa’s response to the coronavirus to that of other states’, and talk about Progress Iowa’s #BeBraveStayHome campaign. Links: Sen. Ron Johnson’s amendment to remove paid sick leave from the Families First Coronavirus […]

Lauren and Greg discuss our government’s (lack of) response to the coronavirus outbreak and the civil rights violations carried out by state police against LGBTQ+ students at the Capitol. Links: WashYourLyrics.com The Advocate: LGBTQ Students Kicked Out of Iowa Capitol Over Restroom Use

Wash your hands, fund our schools, and get some big progressive energy!

Talk Judicial To Me

The legislature gets flushed down the funnel, Joni Ernst sells us out for the NRA (again), and we're joined by Jamie Burch Elliot who gets judicial with us.

I, Gladys Kravitz, do solemnly swear…

Where's Abner when you need him?

The Joke’s On Us, I Guess

75% of voters want to hear new witnesses and John Bolton's out there doing his best Lloyd Dobler impression outside the capitol building but Senators Ernst and Grassley couldn't care less.

The anti-choice amendment advanced to the full State Government Committee and passed on a 10-5 party line vote. We talk about that, our press conference on a new bill protecting Iowans with pre-existing conditions and play clips from the 2020 Presidential Candidate Forum on Democracy held here in Des Moines this past weekend. Links: Hear […]

The Condition of Our State Is…Meh

Matt and Lauren dive into Governor Reynolds’s Condition of the State address and on Thursday, Lauren attended a hastily called subcommittee meeting at the Iowa legislature trying to slip an amendment to Iowa’s constitution under the public’s nose.

A Tall Glass of Haterade

In which our heroes discover a medical malady they didn't know they had.

What a Holiday Party!

Happy Holidays from everyone at Progress Iowa.

O’er on the House Floor

Joni Ernst backs an unqualified judicial nominee, abandons domestic violence survivors, and might have (probably) broken the law. What a week.

The Boyfriend Loophole is Heteronormative

Joni Ernst refuses to reauthorize VAWA, DREAMers get their day in court, and Trump is in big trouble – what a week.

A big election - we’re rocking the suburbs, Ernst makes excuses, and Grassley sucks up to Trump at the White House. What a week!

Barbara Jordan was a swell gal.

Live from the Progress Iowa SCIF. Sadly, we have no pizza.

They Just Do Crimes on TV Now, We Guess

You blew it, Joni!

Fat Bear Week isn't the only hairy situation Matt and Lauren talk about this week.

What Happened to Voting Rights This Week?

Polk County Auditor Jamie Fitzgerald explains the good and bad of this week's big court ruling on voting rights in our state.

The Power of Your Story

"Congressman says he enjoyed drinking toilet water" isn't a sentence you thought you'd ever read... but here we are. What a week.

"The greatest predictor of gun violence in this country is access to a gun."

A conversation with Ed Espinoza

Matt and Lauren discuss State Rep. Steve Holt’s gun range fundraiser held just days after the shootings in El Paso and Dayton, and talk with Progress Texas’s Executive Director Ed Espinoza on what life has been like over the past week in Texas.