What’s next after the funnel with Rep. Christina Bohannan 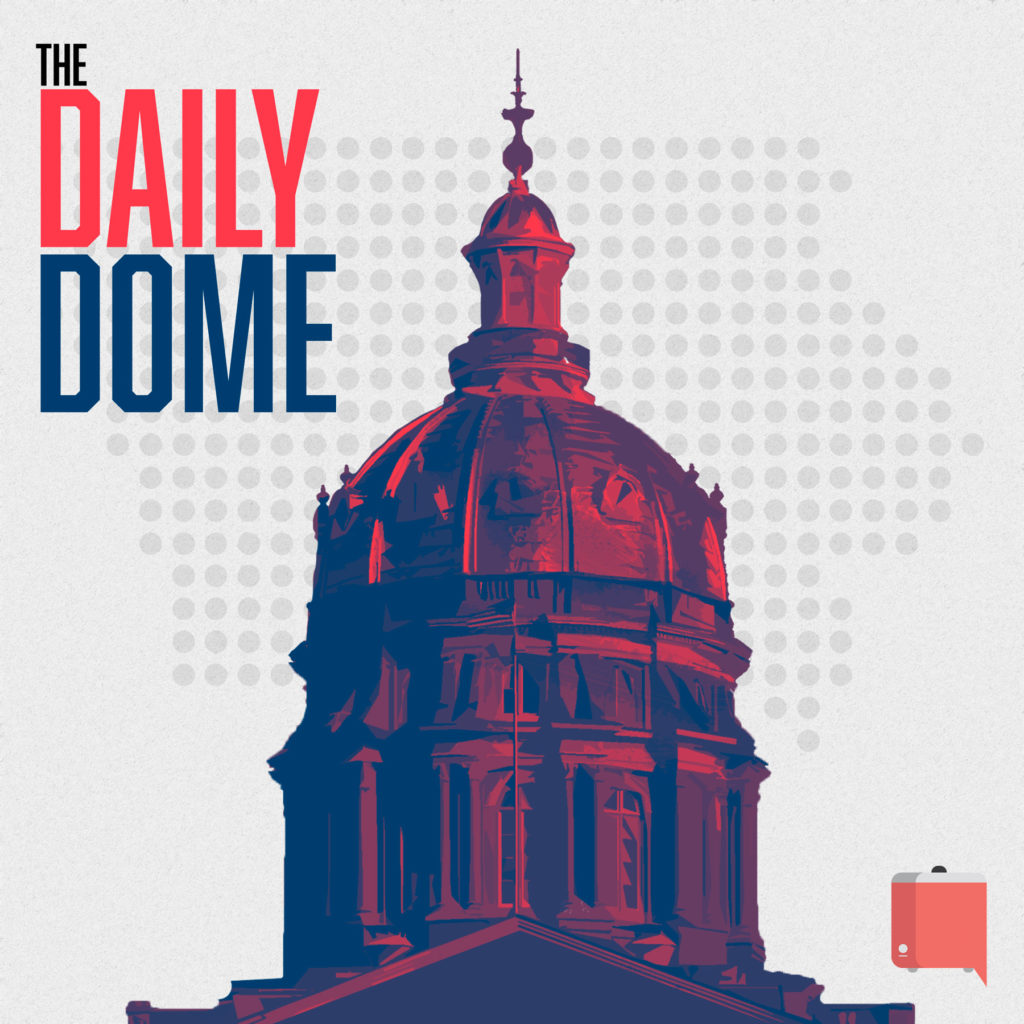 A daily rundown of the goings on at the Iowa Legislature. Season 3 begins January 11th, 2021 and is hosted by Josh Cook.

The Audacity of Ope

Josh talks about the movement on the Iowa GOP’s voter suppression bill and the bill to deny state aid to cities that don’t maintain or increase their police budget. Josh then speaks to Ope PAC founder Amber Gustafson about the new organization dedicated to taking on Kim Reynolds in 2022.

A Conversation with Jaylen Cavil (Part 2)

Josh sits down with Rep. Ross Wilburn (D-Story) about the big votes ahead in the house and his new role as Chair of the Iowa Democratic Party.

A Conversation With Jaylen Cavil Part 1

Josh updates us on bills working their way through the legislature and then talks to Des Moines Black Liberation Movement activist Jaylen Cavil about the “Back the Blue” bill introduced in the Iowa Legislature earlier this session. Part 1 of a multi-part conversation.

The Road Ahead with Sara Anne Willette

Josh stayed up late to cover Governor Reynolds’s 10:30pm proclamation allowing restaurants and bars across the state to open to capacity and ending her mask-wearing recommendations. No, really. Then, Josh speaks with House Assistant Minority Leader Jennifer Konfrst about Speaker Grassley’s ad-hoc enforcement of house rules, the effort to defund public schools, and the effort […]

Talkin’ About My Education

A recap of January with Sen. Sarah Trone Garriott

Josh covers the results of the special election in senate district 41, gives an update on legislation on safe in-person learning, abortion, and gender identity instruction in schools, and speaks with Then, Josh speaks with Rep. Tracy Ehlert, a retired educator, about those education bills making their way through the legislature.

A pair of amendments that will help no one

Josh catches us up on the first few weeks of the legislative session and has a conversation with State Senator Tony Bisignano (D-Polk) about the two constitutional amendments being rammed through the legislature.

A Conversation with Rep. Lindsay James

New Daily Dome host Josh Cook talks to State Rep. Lindsey James about the first few weeks of the session and the bizarre priorities that have come out of GOP leadership.

The Democratic Agenda for COVID Recovery

Today we discuss Governor Kim Reynolds’s Condition of the State address, and play a clip from a conversation with Iowa Senate Minority Leader Zach Wahls of Iowa City. Senator Wahls spoke to us about the insurrection in Washington last week, how the legislature is adjusting to the ongoing pandemic, and the Democratic caucus’s agenda for […]

This is why we can’t have nice things

Yesterday's anti-mask protests at the Iowa Capitol were not explicitly violent, though they could end up being more deadly.

Dome Away From Dome

We’re back for the Iowa’s Legislature’s 89th General Assembly and our third season. Today the leaders of Iowa’s legislative branch outline their goals for the year and try not sigh too deeply because… pandemic. Still. Links: The Iowa Legislature What a Week: Treason, Terror, and a Silver Lining Transcript With the fall of the gavel, […]

Outside of the Iowa Department of Public Health there may be no one who's more closely tracked the number of cases of COVID-19 than State Senator Rob Hogg.

A glimpse of what’s to come with Rahul Bali

Georgia journalist Rahul Bali from the Oconee Radio Group joins Paige to talk about the election issues in his state this past week and how voting early can prevent it happening here. Unfortunately for Iowans, the Senate just passed a bill making it harder to get a mail-in ballot and harder to cast it once […]

Back in March a group of LGBTQ+ students were removed from the Iowa Capitol by state police after complaints some students used the “wrong” bathrooms. They broke neither law nor rules of the Capitol but they were still forced to leave. Rep. Jennifer Konfrst (D-Des Moines) was one of the elected officials who met with […]

Matthew Bruce on BLM in DSM

Paige talks to Matthew Bruce, an organizer with the unofficial Black Lives Matter chapter in Des Moines about this weekend’s actions and the demands of the movement.

Well, it happened. The Iowa Legislature has suspended for at least 30 days, likely until the COVID-19/Coronavirus crisis is over. Since nothing (literally) is happening at the Capitol, our mics will go quiet. Once they come back, so will we. Wash your hands and stay safe. Thanks for listening.

Should Student Athletes Be Compensated?

Though the bill didn’t make it through the the legislative funnel, Rep. Ras Smith (D-Waterloo) joined us to talk about his push allow Iowa’s student athletes to receive monetary compensation for their likeness. Links: The Gazette: Pay for play? Iowa lawmakers propose college athletes be paid Rep. Ras Smith’s legislator page Follow Rep. Smith on […]

John Forbes is a pharmacist from Urbandale who supports allowing Iowans to use cannabis products for medicinal purposes. Lucky for those Iowans, he’s also a State Representative. The background: Governor Reynolds vetoed a medical cannabis bill last year that passed with bipartisan support. There was a discrepancy in the amount of THC these products could […]

The Bipartisan Push on Childcare

Fresh off their Moral Monday speech, Lana Shope from Iowa Community Action Association and Mary Nelle Trefz from the Child and Family Policy Center talk with Paige about two bills working their way through the legislature that could make it harder for Iowans to receive assistance.

How Can Democrats Make Gains in Small Town Iowa?

Paige sits down with the new chair of the Iowa Democratic Party, Representative Mark Smith. Rep. Smith is embarking on a multi-city tour to talk about health care and the choice in November’s US Senate election here in Iowa. Links: The Gazette: Iowa Democratic leader on the road to attack Joni Ernst’s on health care […]

Rep. Chuck Isenhart (D-Dubuque) is the Ranking Member on the Agriculture and Natural Resources Appropriations Subcommittee. Paige talks to him about what that subcommittee does, what his priorities are this session, and how Iowans can help. But first, a bit about our new host, Paige Godden! Links: Save REAP on Facebook Rep. Chuck Isenhart’s legislator […]

Daily Dome’s new host Paige Godden sits down with Rep. Mary Wolfe to discuss the push to restore voting rights to those convicted of a felony since 2011 when then-Governor Terry Branstad rescinded his predecessors’ executive order that automatically restored those rights. According to the Brennan Center for Justice, “Iowa is the only state to […]

There's been a number of stories lately from around Iowa about mobile home owners and renters seeing huge hikes in rent for their home or the land on which it is parked. After hearing from stakeholders, the legislature has decided to take action.

What in the blue blazes is “Funnel Week” and why is it going to keep our legislators up all night all week long? We talk to Rep. Liz Bennett of Cedar Rapids about what it is, how a bill survives it, and what issues she’s fighting for (and against) this week. Links: Rep. Liz Bennett’s […]

Listen as we chronicle the life and death of a truly terrible bill.

Ever wonder who those folks are sitting next to legislators in the House and Senate?

Learning to Pick Your Battles with Senator Claire Celsi

A Not So Subtle Subcommittee

Remember that constitutional amendment we talked about earlier this week from Gov Reynolds speech? Yeah, it's on the move.

Iowa House Democratic Leader Todd Prichard is our guest for this entire episode.

Governor Reynolds’ Condition of the State

Governor Kim Reynolds gave her third Condition of the State address before a joint session of the Iowa legislature. Here's what was (and wasn't) in it.

So that’s how they heat the building

Day 1 of the legislature saw speeches from the leadership of both parties from both chambers.

Welcome to The Daily Dome.

The Daily Dome covers the Iowa Legislature. In 15 minutes or less you’ll get a rundown of the most important bills introduced in each chamber, how they could affect you, and the occasional chat with the lawmakers and key players behind those bills. I also want to answer your questions about our state government. Each […]