It has become a familiar story: Tax breaks and tax expenditures growing at a pace that spending on traditional state priorities cannot match. This growth continues on autopilot, year after year, with little scrutiny and often with weak justification. 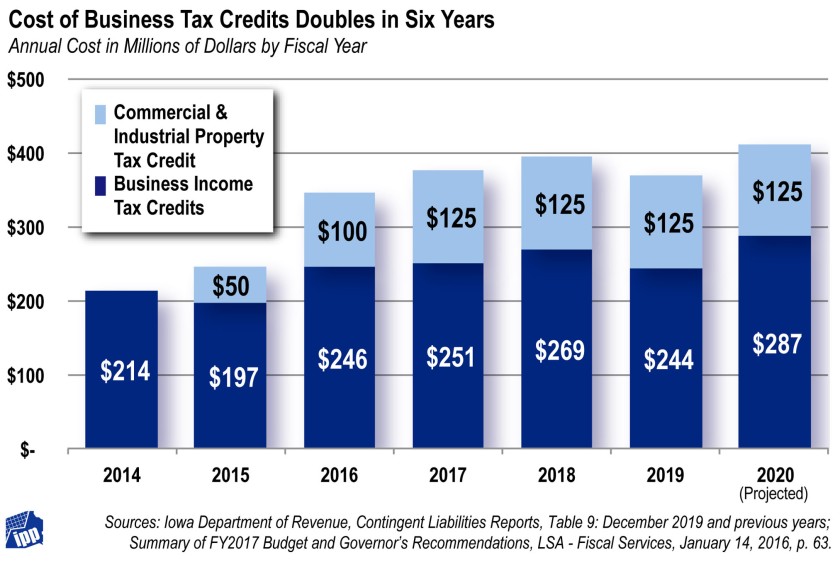 Related business breaks would drive total spending on subsidies to business much higher.

The total cost of business subsidies, in other words, approaches $800 million, even without other so-called tax expenditures, such as the state’s use of single-factor apportionment.

Tax credits have the same impact on the state’s bottom line as any other spending. Such spending comes outside the normal budget process where agencies, advocates and constituents make proposals that lawmakers vote up or down, on the record. Tax credits, with few exceptions, cause spending outside that competition.

State spending on business subsidies necessarily comes at the expense of other budgetary priorities, including education, health, and public safety. Investments in education and infrastructure, the building blocks of a strong economy, suffer when the annual budget debates start out with a billion dollars already committed to business incentives.

Real reform is needed now more than ever.

[4] Legislative Services Agency, FY 2018 Annual Urban Renewal Report, February 15, 2019, p. 24. About 15 percent of TIF erxpenditure in FY18 went directly for business projects; it is not known how much of the 63 percent that went to property acquisition, roads, bridges, utilities, and water or wastewater treatment plants was associated with business development.

Peter Fisher is the research director of the Iowa Policy Project.
Copy Link Link was copied