Reflection on the Past

Black History Month always motivates me to think about my youth.  As a very young child, my parents would always find a babysitter for me so that they could attend a show on any given evening, on Center Street.

Started in the early 1900’s by the Negro Business League the street became a vital part of the daily existence of African Americans in Des Moines.  Center Street was the home of numerous night clubs that catered to African Americans.  In these clubs, the greatest African American jazz and blues performers played.

After I grew up, in the late 1960’s, I also frequented Center Street.  I enjoyed such artists as Count Bassie, Fats Domino and Duke Ellington at my favorite club on Center street, The Sepia Club. 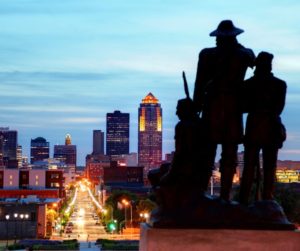 When I returned to Des Moines in 1970, after receiving my Masters Degree from the University of California at Santa Barbara, Center Street was no more.  A few of the clubs had resettled on University Avenue, but it was never the same.

Nothing could replace the rich black atmosphere and culture that thrived in its own private location northwest of downtown.  It had been a place of refuge from discrimination and bias, as well as a home base for African American identity for many, many years.  This safe haven for people like me, was one of happiness, enjoyment and connection to those who really knew and understood us.

Although much time has passed since the fall of Center Street, I still miss it.  Center Street will always be a memory of a time and place where I could openly express myself about how much I lOVE BEING BLACK.  Yes, progress has been made in terms of race relations, but there is no place and time here in Iowa, when I have ever felt so good!!!

Photos on this page courtesy of CanavPro